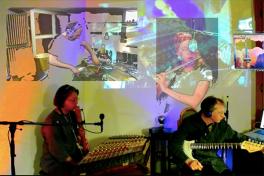 On Sunday, November 7th, The Sonic Arts Ensemble, featuring Ann Stimson, Marc Ainger, and Oded Huberman from ACCAD; Atelier Avant (Se-Lien Chuang and Andreas Weixler) from Austria; and Scott Deal (Director of the Tavel Arts and Technology Research Center, Indiana), performed and presented on their networked ensemble work as part of the NowNetArts Conference 2021.  Also appearing in the conference on November 6th at 12 PM EDT was a spin-off ensemble, You Should Listen To Elektra The Sonic Arts Ensemble featuring Fede Camara Halac and Jacob Kopcienski (ACCAD). 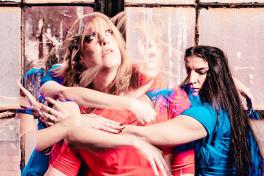 In early November 2021, as part of a yearlong residency at the Wexner Center for the Arts, Norah Zuniga-Shaw (Dance/ACCAD) invited participants to explore digital performance capture including immersion and audience interaction. She draws on resources from her collaboratively created transmedia performance rituals Climate Gathering and Livable Futures podcast.

November 3, 2021, Design MFA candidate Simone Downey presented a virtual live demonstration of her digital tabletop game, Murder on Mansion Hill, for the IFIP International Conference on Entertainment Computing. The conference was held in Portugal this year. Her game was also accepted into the IFIP game competition. 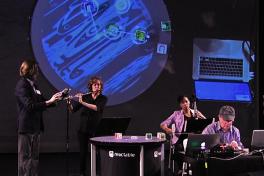 On November 10, 2020 the Sonic Arts Ensemble joined remotely with performers around the world–including the honorable New Renaissance Artist Elizabeth A. Baker–for a one-night live-streamed event. 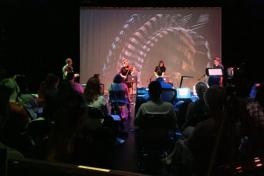 On September 22 and 23, 2019, Se-Lien Chaung and Andreas Weixler visited from Austria (Universitat fur Musik und Darstellende Kunst, and Anton Bruckner Privatuniversitat) to take part in rehearsals, a workshop, and a performance of Virtuoso Chances with students and faculty of the OSU College of the Arts and Sciences.

The Curious Incident of the Dog in the Night-Time
April, 2019 (10 performances, Roy Bowen Theater) 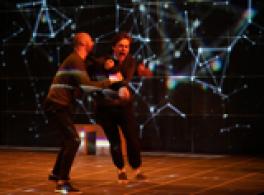 The OSU Department of Theatre presented, The Curious Incident of the Dog in the Night-Time about a teenager with autism spectrum disorder. Alex Oliszewski (Theatre / ACCAD) and lighting director Mary Tarantino (Theatre) closely collaborated on this media-intensive production of the play written by Simon Stephens (based on the novel by Mark Haddon). OSU Theatre professor, Kevin McClatchy directed. This media, technology infused production was highlighted in OSU's Alumni Magazine (summer 2019). 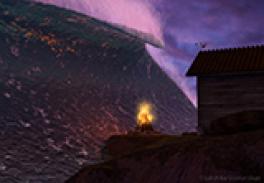 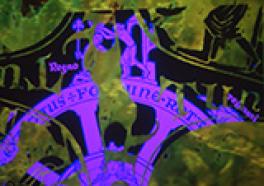 The Choral Studies department in the OSU School of Music presented Carl Orff's masterpiece Carmina Burana, with updated visual imagery in the dimension Orff originally indicated. Faculty members, Alex Oliszewski (Theatre / ACCAD) and Anna Gawboy (Music Theory) lead the creation of a digital-visual design that was scored to the music. 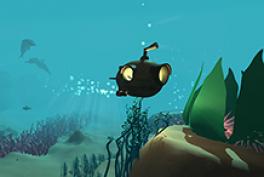 Ohio State / ACCAD and Nationwide Children's Hospital (NCH) were recognized for being 1 of the top 5 finalists in the area of Health, Med and Biotech, at the internationally recognized SXSW Festival, a very prestigious honor. The award acknowledges new technology that best improves the quality, efficacy and cost-effectiveness of prevention, diagnosis, treatment and care in health and medicine.

The Boy Who Draws Cats 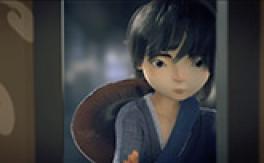 Windswept (for laptop and ensemble) 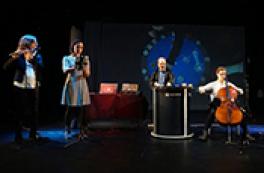 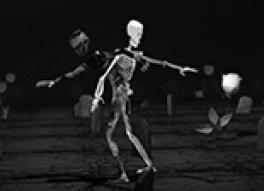 ACCAD's Thurber Dogs animation produced by ACCAD staff, faculty and students in 2007-2008 and performed by the Columbus Promusica Chamber Orchestra in 2008 and 2013 will be featured in a performance by the Chattanooga Symphony Orchestra February 18, 2016.

Professor Emeritus Charles Csuri's work, Random War, is on display during a special exhibition at the Royal Museum of Fine Arts Belgium, Sept 11, 2015 through January 24, 2016.

Drums Downtown XI was a collaboration with the OSU School of Music Percussion faculty and students and OSU Dance Department. Performances were April 3 – 4, 2015 at the Riffe Center's Capitol Theater.

Here Be Giants is a MFA thesis film by Thomas Heban. According to Tom the film was "guided by an intersection of my interests in the mythic qualities of landscape, personal documentary and temporal scale".

There Is No Silence

Marcel Marceau’s alter-ego “Bip” came to life on stage when Ohio State presented the technologically groundbreaking, collaborative production of There Is No Silence, a devised new work inspired by the great French mime artist.

The gallery installation consists of a high resolution panoramic projection, 35 feet wide by 7 feet high, displaying real time rendering of the origins and growth of the city, incorporating datasets of city plantings and traffic flow, along with tracings of the movement of participants throughout the city using a mobile app designed by the artists. Installed in June 2013.

Musical performance by Students and Faculty from the OSU School of Music based on Steve Reich's composition. Real-time computer animation by Alan Price. Performed February 24 & 25, 2012 at the Capitol Theater, Columbus, OH.

Other Csuri Awards and Recognitions

The Games I Made Up

JANE: Diary of a Dinosaur

When I am Little Again

Short animations based on motion capture of Bebe Miller Company

Butterflies in the Rain