The College of Arts and Sciences at The Ohio State University has been an innovator in computer graphics and animation for the past three decades.

Pioneering work was initiated in 1963 by Professor Charles Csuri in his role as a professor in the Department of Art at OSU. Working as a painter, he became increasingly fascinated with the computer and its potential as an artistic tool. In 1967, he used a line drawing of a man and working with a fellow faculty member from the Department of Mathematics, modified its shape using a sine curve mapping and a mainframe computer. Lacking an output medium for recording this primitive animation, he plotted the intermediate frames on paper using an IBM plotter to create a haunting blend of images.

That same year, he continued with this experimentation on other drawings, including one of a hummingbird in flight. Csuri produced over 14,000 frames, which exploded the bird, scattered it about, and reconstructed it. These frames were output to 16mm film, and the resulting film Hummingbird was purchased by the Museum of Modern Art in 1968 for its permanent collection as representative of one of the first computer animated artworks. Also in 1968, Csuri was one of the featured artists at an exhibition at the Institute of Contemporary Arts in London, and his work in computer animation was featured in the catalogue titled "Cybernetic Serendipity - the computer and the arts," published that year by Studio International. This publication was the one of the first collections that dealt with "...the relationships between technology and creativity."  In February of 1995, Csuri was featured in a cover article of the Smithsonian magazine.

Csuri continued to work with graduate students and fellow faculty members for the next several years, experimenting with different approaches to instructing the computer to animate the various artifacts that he conceived. In 1969 he received a prestigious grant from the National Science Foundation to study the role of the computer and software for research and education in the visual arts. This was very unusual, for an artist to receive an NSF grant, and showed the level of significance of the work at OSU at the time. (In fact, a recent internal report done at the National Science Foundation stated that the greatest impact on the field of computer animation could be attributed to CGRG.) In 1971 he proposed a formal organization, called the Computer Graphics Research Group (CGRG) in order to realize the potential of the application of computer animation to the studies of students in the Art Department, and to have a formal cohort that could attract external research support. Members of CGRG included faculty and graduate students from Art, Industrial Design, Photography and Cinema, Computer and Information Science, and Mathematics. Grant proposals were submitted both in and out of the University, and funding was provided for studies that would extend the capabilities of the evolving discipline. The group was housed in space in the OSU Research Center at 1314 Kinnear Road on the campus.

This seminal work evolved into a general interest in dynamic systems and languages for applications in computer-controlled motion. In 1970, Csuri published one of the first papers related to the complex issue of animating objects in real time, following work by Baecker and others.

He was awarded his second NSF grant in 1971 for a project titled Software and Hardware Requirements for Real Time Film Animation. This grant supported graduate students Tom DeFanti, who developed the animation language Graphics Symbiosis System (GRASS) in 1972, and Manfred Knemeyer, who developed the ANIMA system in 1973 for defining computer generated motion, using an integrated programming language. Both of these systems were designed with traits that DeFanti, now at the EVL at the University of Illinois, called habitability (ease of use by novices) and extensibility (the use of stored files to be interpreted by the system), and both linked to external controls like dials, buttons and joysticks in addition to command line control.

Expanding on Csuri's early work in blending of line drawing images, Mark Gillenson (now at IBM) developed a system (FaceIt) that used techniques of key frame animation to blend images to create facial drawings, a system that created a significant amount of interest in the police and investigative communities. This system was one of the first formal contributions to the technology that is now called "morphing".

CGRG efforts embraced a philosophy that these complex computer animation capabilities could be made available on microcomputers (eg, PDP 11/45) and could be easy to use. The group continued to receive NSF and other external support for this effort, and published extensively during the early 1970s on animation and animation control.

Richard Parent (now a Professor in Computer Science and Engineering at OSU) joined CGRG in 1974 to develop geometric modeling tools for animation (his 1977 dissertation received the "Best PhD Dissertation Award" from the National Computer Conference).

During this early period, Alan Myers studied and developed rendering algorithms that could run efficiently in the minicomputer environment to make high quality imagery.

These efforts resulted in the ANIMA II animation system, which supported procedural modeling and run-length encoding algorithms, the DG modeling system for data generation, and other supporting systems and languages. The group also included Rodger Wilson and Wayne Carlson, and a number of other graduate students from various departments during this period. CGRG team members used the systems that were developed to generate computer animations that were shown throughout the mid to late 1970s, and published in SIGGRAPH proceedings and other journals the results of their work. The group was also featured in many popular media presentations, including television features such as PM Magazine and CBS Sunday Morning. Other important work produced during this period included a visualization of interacting galaxies (Bob Reynolds), studies of time in virtual environments (Sam Cardman), the use of CGI in visualizing statistical data (Hal Moellering, Rodger Wilson and Wayne Carlson), the use of animated sequences to help teach language constructs to deaf children (Parent, Hackathorn, Van Hook, Wilson and Carlson), terrain modelling and harbor pilot training simulation (Parent, Wilson and Marshall), and computer art (Csuri, Van Hook, et al).

In the late 1970s, the work turned in the direction of increased complexity of modeling and animation and visual accuracy.

Wayne Carlson worked with Rodger Wilson and Bob Marshall to expand the procedural animation capabilities introduced by Newell of University of Utah, and also developed an expanded surface modeling environment as part of his PhD research. 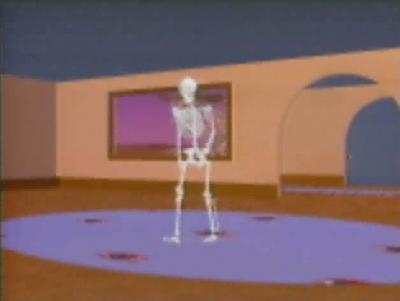 In 1981, Chuck Csuri approached an investor (Robert Kanuth of The Cranston Companies) to transfer the computer animation technology created in the CGRG lab to the commercial world, and Cranston/Csuri Productions, Inc. (CCP) was formed. It moved, along with CGRG to a Columbus facility, the former Academy for Contemporary Problems building, at 1501 Neil Avenue in Columbus. This co-location of the two organizations was important to the continuing development of each.

CCP staff rewrote the software that was in the research lab so that it was a little more user-friendly and less research oriented, and added specialized utilities for character animation, procedural effects, rendering, geometric modeling and post production. This suite of software was used to provide animation for television and advertising until CCP went out of business in late 1987.

Special purpose hardware included the Marc IV custom frame buffers, which were designed and built by CCP employee Marc Howard. These frame buffers provided the ability to do extended low resolution motion tests that were stored in frame buffer memory and played back in real time. CCP used Vax 11/750s, 11/780s, Pyramid computers, Sun workstations, and a modified Ampex Electronic Still Store (ESS), which was designed for slow motion replay by the television network sports industry. Images were calculated and stored on one of several magnetic disks; the machine was programmable to facilitate the 30fps playback with a direct NTSC video output. CCP also had a Celco 2000 film recorder, which could be used for 16mm and 35mm motion picture film, or 35mm slide or 4x5 transparency still output.

During the 7 year period that they were in business, CCP produced almost 800 animation projects for over 400 clients world-wide. The software was also licensed in 1985 to Japan Computer Graphics Laboratory (JCGL) for use in the Japanese market. Key projects included: opening graphics for three Super Bowls; the on-air sports promotions for ABC, CBS, NBC, and ESPN networks; news opens and promos for all of ABC's news shows, as well as news opens for CBS, CBN, Fox and PBS; international network promos for ARD (Germany) CBC (Canada) ABC (Australia), Globo (Brazil) and Scottish Television; entertainment graphics for ABC, NBC, CBS, Turner, Showtime, HBO, Fox, and over 100 local affiliates; award winning ads for TRW, Sony,

The software was purchased by Lamb and Company in Minneapolis, and some of the management of CCP moved to Los Angeles to form Metrolight Productions (President Jim Kristoff) and RezN8 Productions (Creative Director Paul Sidlo). Chuck Csuri left CCP in 1985 to return to his OSU duties at CGRG, and Vice President Wayne Carlson took over the Presidency of CCP in 1987 in order to see it through Chapter 11 liquidation, and returned as an Assistant Professor to the Ohio State Computer Science Department when the company closed. He later became Director of ACCAD, Chair of  the Department of Design and is currently Vice Provost and Dean of Undergraduate Education at Ohio State. 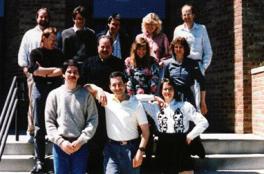 In the late 1980s, a group of ACCAD personnel connected with The new Ohio Supercomputer Center for the purpose of developing a flexible environment for use by supercomputer users to visualize their scientific computational data. Scott Dyer (Nelvana), Bob Marshall, Peter Carswell, Barbara Dean, Jeff Faust, Jeff Light, John Berton, Steve Anderson, Joan Staveley and others at the Ohio Supercomputer Graphics Project (OSGP) contributed significant results for a data-flow based animation and visualization environment called apE, which was the precursor for several commercial scientific visualization products.

Tom Linehan (Ohio State University - OSUArts) and Chuck Csuri converted the Computer Graphics Research Group into The Advanced Computing Center for the Arts and Design in 1987, with funding from a long-term Ohio Board of Regents Academic Challenge grant. ACCAD was established to provide computer animation resources in teaching, research and production for all departments in the College of Arts and Sciences at Ohio State. 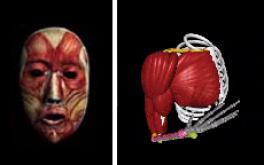 A more complete list of the alumni of the program and their current affiliations can be found in the Alumni section of this site.

Also find a compilation of the projects  that have been generated by faculty, staff, and students at ACCAD at the Research Project Gallery.