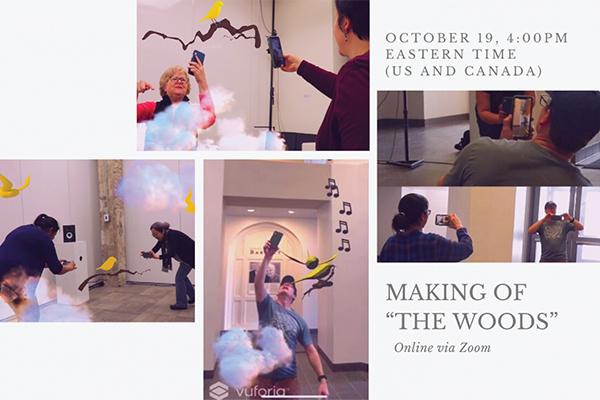 Join Professors Kyoung Lee Swearingen and Scott Swearingen along with other panelists for the Making of 'The Woods' webinar on Monday, October 19th from 4-5pm via Zoom.

Register in advance for this webinar:
https://osu.zoom.us/webinar/register/WN_FFgXOvTGSuCG-gzHi1BuXw

After registering, you will receive a confirmation email containing information about joining the webinar.

'The Woods’ is a multiplayer cooperative game that employs Augmented Reality (AR) and 4-channel audio spatialization panning to produce a shared experience that is both digital and physical. It is designed from the ground up to promote social interaction and collaboration. As players choreograph their movement in real-world space, they find themselves interacting with birds, clouds and other objects in virtual space. Together, players experience an immersive sonic narrative of rumbling storm clouds and despondent voices that culminate in stories of reconciliation. ‘The Woods’ provides positive social impact by illuminating our connections and inspiring us to respond to one another through collaboration and the pursuit of shared goals.

The narrative of ‘The Woods’ speaks to the perils of social isolation while promoting connections between people and actively engaging them in play. As a cooperative game, players collaborate towards a shared goal: collecting fragments of messages left by a lonely grandmother, displaced siblings, and divorced parents. To do this, players  provide birds in flight a perch to land on and offer them respite during stormy weather. Upon landing, the birds deliver these fragments. After collecting enough birds and avoiding storm clouds, the voicemail will play in its entirety, revealing a moment of reconciliation.