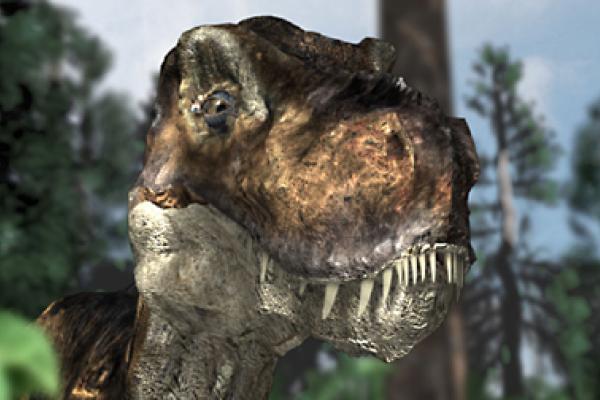 Jane the dinosaur may have lived 66 million years ago . . . but a group of students from The Ohio State University’s Advanced Computing Center for the Arts and Design (ACCAD) have helped bring the young Tyrannosaurus rex to “life.” The students, led by ACCAD Director Maria Palazzi and Graphics Research Specialist Matthew Lewis, were engaged by a small museum in Rockford, IL, to help create a technological-savvy, interactive exhibit spotlighting the museum’s remarkable new inhabitant. Jane – an incredibly well-preserved skeleton of a juvenile T. rex – was discovered in 2001 in Hell Creek, Montana, by staff members and volunteers from Burpee Museum of Natural History. The group returned a year later and began painstakingly excavating the dinosaur bones to take them back to Rockford. Over the next two years, they spent more than 10,000 hours gingerly picking Jane’s bones out of rock, and planning a new, permanent exhibit that would tell Jane’s story and feature her fully restored skeleton.

That exhibit – “Jane: Diary of a Dinosaur” -- opened June 29 at Burpee Museum in Rockford, about 60 miles west of Chicago. The 2,000-square-foot exhibit tells visitors Jane’s tale, and features hands-on interactive stations, computer-generated animation, colorful graphics and, as its centerpiece, Jane’s fully restored skeleton, which is the most complete juvenile T. rex on display anywhere in the world.