The Drinking Problem is an interactive experience designed to convey the emotional dynamics of interacting with a hopelessly addicted friend or family member. Building on the concept of affective interactive character design, the installation was an attempt to explore the ability of interactive characters to elicit powerful, self-reflective emotions in those who interact with them.

The Drinking Problem is intended to provide users with an emotional experience from two perspectives, the first of which is the Alcoholic character himself. By giving this character the ability to display affective behavior, users are given a window to the character's emotional state. As this state changes in response to user interaction, an emotional narrative emerges. The second perspective is that of the user interacting with the character. This view is representative of the primary purpose of The Drinking Problem, which is to recreate part of the emotional experience of interacting with a hopeless addict.

Set in a digital environment resembling a kitchen, users engage the Alcoholic from a first-person perspective. Users interact with the Alcoholic by manipulating objects in his immediate environment to produce various types of behavioral responses. As The Drinking Problem is intended to function as a touch-based display, user interaction is limited to objects that can be clicked on, dragged, and released. 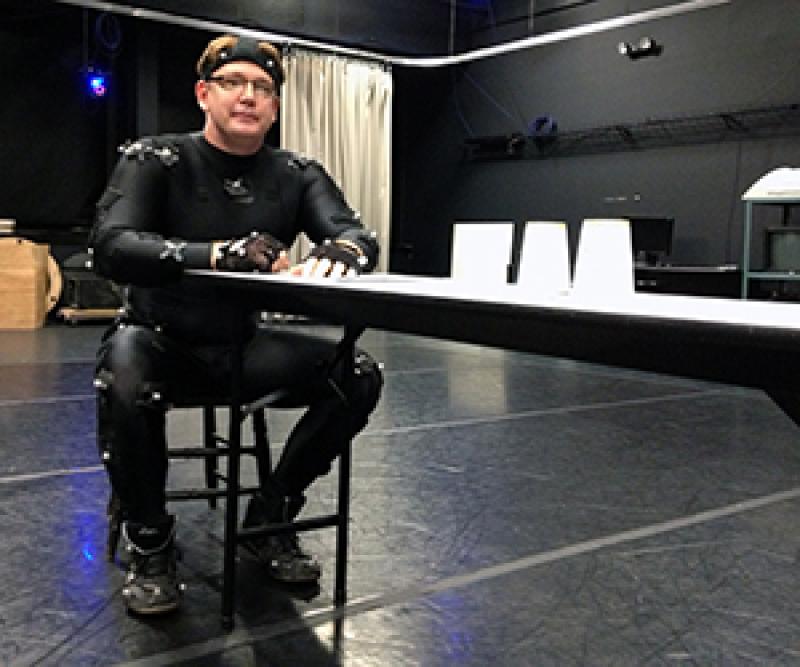 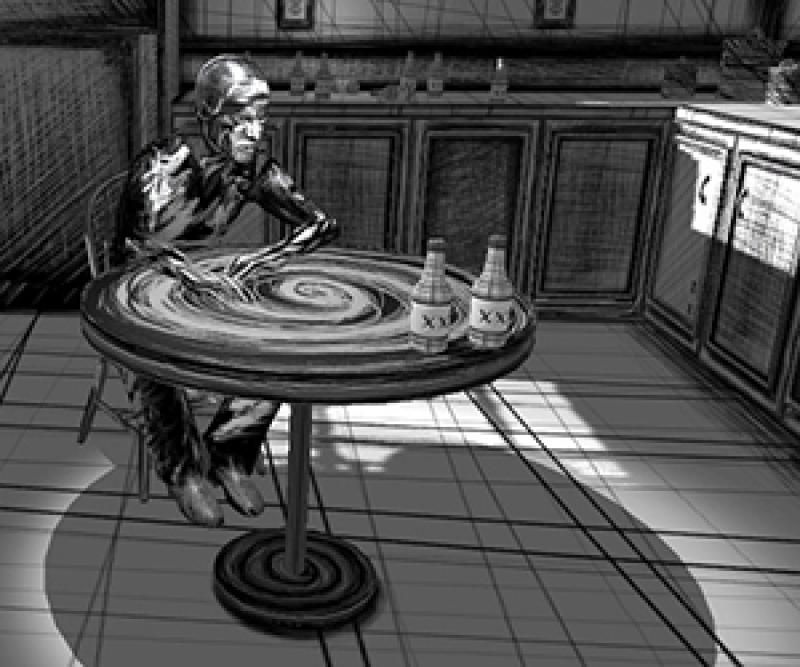 Users have the ability to manipulate objects in the environment, although not the Alcoholic himself. This is intended to mirror the real-world concept that one cannot make an addict do anything directly. The primary objects users are able to manipulate are the alcohol bottles found throughout the environment, which can be moved and placed around the kitchen. The kitchen environment and its contents were created in Autodesk Maya and imported into Unity 3D. The Alcoholic character mesh and rig was refined from a generic Mixamo template. All materials, textures, and shaders were created with Adobe Photoshop, Maya, and Unity. All textures were hand-painted using a Wacom Cintiq display. 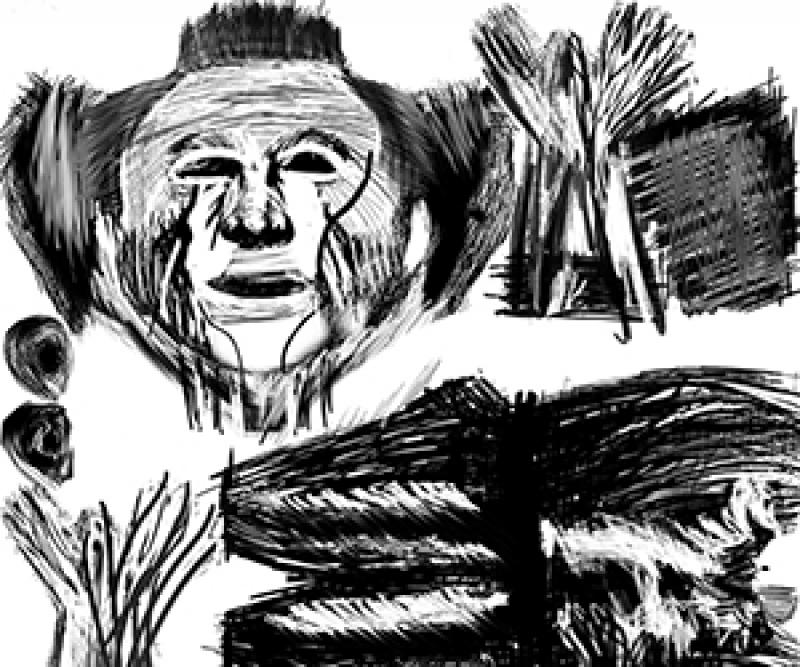 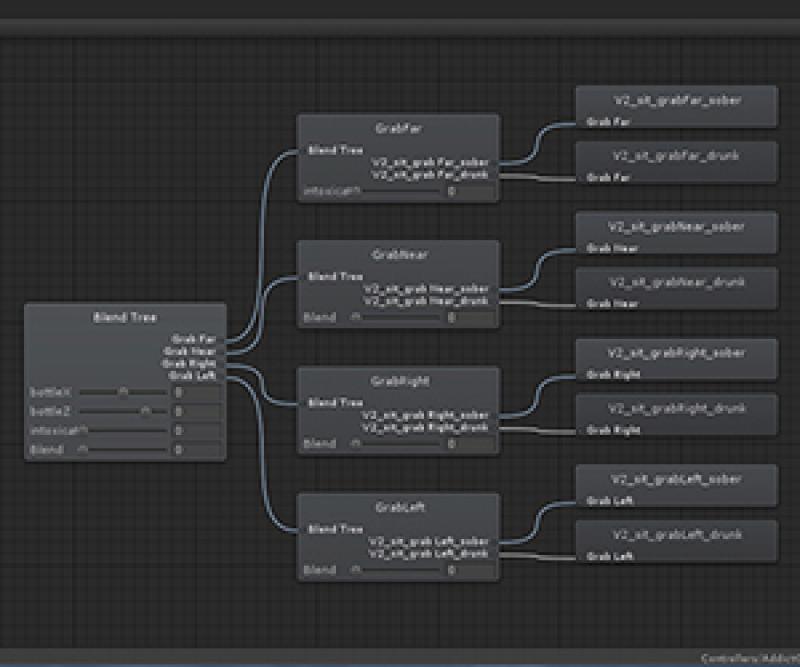 Motions and gestures of the character were captured using Vicon Blade and refined using Autodesk MotionBuilder and Maya. All interaction was scripted in Unity using JavaScript and Mechanism to make use of the system's state machines, blend trees, and other animation features. While the facial expressions of the character are procedurally activated and blended, original expressions were manually animated using keyframing techniques.

Users can do one of only two things with these bottles; place them inside or outside the Alcoholic's reach. Placing them within reach allows the character to grasp the nearest bottle and drink its contents. Moving the bottles out of reach will temporarily delay his ability to drink. If the user breaks the bottles or keeps them out of the character's reach for too long, new bottles spawn that the Alcoholic will be able to retrieve.

This represents the primary goal of the Alcoholic, which is to find the next bottle and drink it. Once he is finished drinking the character discards the current bottle, then locates and retrieves the next one to continue the addictive cycle. As the Alcoholic drinks more over a certain period of time he exhibits increasing levels of drunken behavior. This behavior is projected through gestures, postures, and facial expressions characteristic of intoxication.

Left to his own devices, the Alcoholic will drink himself almost to the point of death. At this point the character stops drinking and slowly begins to recover. When the character reaches his maximum level of intoxication, the program resets itself by increasing the rate of recovery and temporarily suspending the drinking behavior. Once the Alcoholic has reached full sobriety, the bottles begin to spawn again and the character resumes drinking.

Kellen is an interactive media developer and graphic designer who currently works as a Interactive Media Consultant for the Wexner Medical Center for the Ohio State University. He previously served as an Assistant Professor for Interactive Media in the Department of Computer Graphics Technology at Purdue University. In his professional experience he has worked as a interactive media developer and independent graphic designer.

Kellen has been exploring graphics and interactive development for over thirteen years. He holds an M.F.A. in Design from the Ohio State University and an M.S. in Computer Graphics Technology from Purdue University. His research and development interests focus on affective design, user experience (UX), and interactive human factors. His most recent work has focused on affective interactive virtual characters used in areas such as gaming, simulation, and web application development.