This student thesis project is an investigative process for developing interactive gesture libraries.

Gesture Mapping for Interaction Design: An Investigative Process for Developing Interactive Gesture Libraries is a thesis completed by Lane Kuhlman that discusses best practices for applying gestures within interactive scenarios by defining many characteristics of gestures that represent a broad range of gestural expression. Gestures play important roles as facilitators of language development, temporal-spatial learning, and non-verbal communication. Gesture-based interaction design seeks to capitalize on this natural method of human communication by using gestures as a means of interfacing with digital content. This research articulates more clearly some intrinsic characteristics of gestures that are significant to gestural interface designers while providing methodologies that designers can use to gather and implement this information in a fashion that suits their unique design processes.

Because interface designers are seeking gestures that can be incorporated into interactive scenarios, there is a need for example of gestures produced in response to visual-spatial cues. The aim of this study was to create a library of gestures that can serve as a reference to designers who are seeking visual-spatial representations of a broad range of gestural expression. Methods of visual and spatial contextualization that can be applied or expanded upon by gestural interface designers who are seeking to build unique gestural vocabularies on a project-by-project basis are presented.

The results of this study include documentation of an approach that can be used to generate libraries of interactive gestures. Because gestures have recognizable visual and formal relationships to the things that they represent, their interpretation is closely tied to the context in which they are used.

The thesis documents the development processes for several interactive prototypes. Each of these prototypes helped to define specific research questions that may be important issues as gesture-based interaction design moves forward as a field of research.

Prototype: The Geometry Drawing Table
Several participants may interact with the drawing table simultaneously. The table consists of a modifier tool and a drawing tool that when used alone or in combination produces varying results. When the modifier was placed on the table alone, a menu appeared. Turning the modifier would highlight various icons on a menu that represented drawing modes. Lifting the tool from the table would select whichever mode was currently highlighted. The modifier could be used to select one of 6 drawing modes: Free-Hand, Line, Triangle, Square, Circle, and Erase. The drawing tool could be used to draw shapes, depending on which mode was currently set. 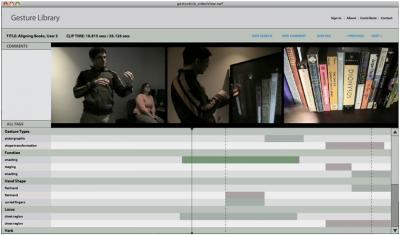 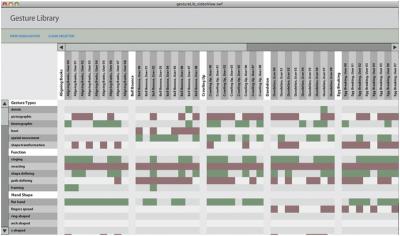 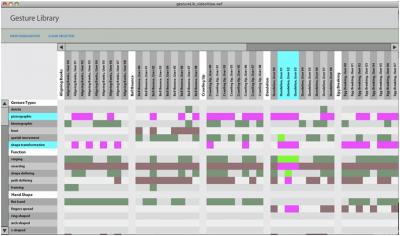 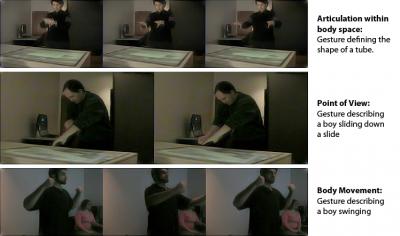