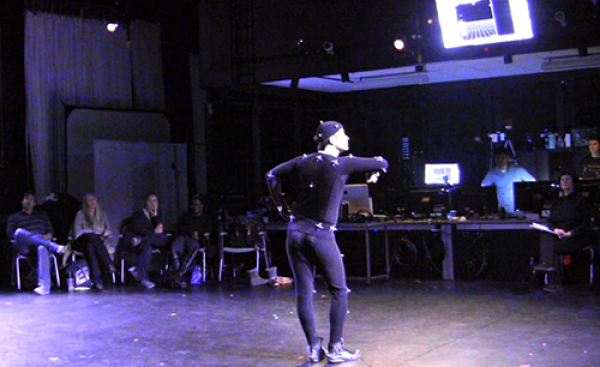 Acting MFA cohort 2015-2018, other undergraduate and graduate students in the Department of Theatre

This project explores meaningful ways to learn complex expressive movement through viewing motion capture data in virtual reality and performing for motion capture. At the center of this research is historic performance data of adagio At the Bar captured by the legendary mime artist Marcel Marceau at ACCAD Motion Lab in 2001. As the commercial virtual reality headsets evolved to allow for a comfortable immersive experience, the group began experimenting with the ways to engage students with this unique movement data set. A group of students from Jeanine Thompson’s Mime Arts class began by learning Marceau’s adagio At the Bar from a video, then motion capturing their performances and viewing them in the same virtual space as Marceau's. Both Marceau’s and students’ avatars were identical in their appearance. The idea was to direct the students’ focus on quality of motion rather than visual appearances of bodies and faces.

Using VR headset the students are able to view Marceau's figure and performance visualized on a human scale, walk around him and physically follow his movements. Reviewing their motion captured performances the students are not only able to identify how their movements differ from Marceau's but also what movement qualities contribute to their own unique movement identity.