Several real-time mediated performance based on current research at ACCAD. During the 2014 ACCAD Open House, in conjuction with the Sullivant Hall grand re-opening celebrations, three real-time intermedia works developed in the Motion Lab were presented. 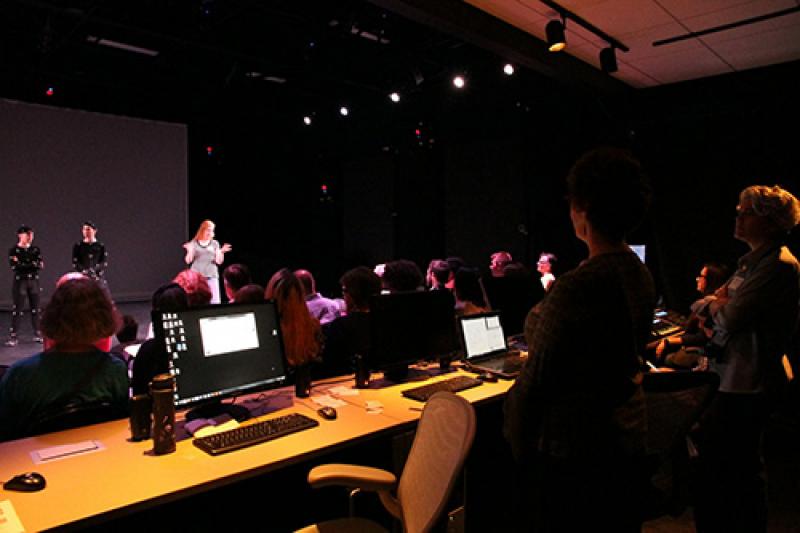 Dark Full Ride is a composition for four drum sets by Julia Wolfe. Part one of the composition makes use of only high hats and cymbals. The musicians perform with responsive animation driven by the audio feeds from four microphones; one for each player. With metal as a theme, paper clips, thumb tacks, staples, scissors, knifes, forks, keys, and finally the cymbals themselves are launched into the air as the drummers strike their instruments, the variations being driven by the amplitude and velocity of the playing and as the composition progresses over time. Dark Full Ride was performed by the OSU Percussion Ensemble at the Capitol Theater in Columbus, Ohio, as part of the Drums Downtown XIII performance on February 18 & 19, 2011, and for Drums Downtown X on April 4 & 5, 2014.

"At the Bar": Duet with Marceau

In 2001 ACCAD welcomed the celebrated french mime, Marcel Marceau, as the first performer in our Motion Capture Studio. A set of pantomimes and adagios were performed by the 78 year old master and captured using ACCAD’s newly (at that time) purchased Vicon optical motion capture system. In 2013-14 this data became part of a mime training workshop for a group of Theatre Department MFA actors devising the play “There is No Silence” dedicated to Marceau’s life and work. As part of the workshop, actors were able to learn and perform the pantomime “At the Bar” in real-time from Marceau’s recorded performance. Patrick Wiabel created his own performance that compliments the recorded data creating a live dialogue with a memory of the now deceased artist.

This project is a collaboration between Vita Berezina- Blackburn and Norah Zuniga Shaw in collaboration with the dancers using the full capacities of the Motion Lab at ACCAD. Still in its early phases, the project uses text as visual poetry within which to investigate the integration of movement making, story making, and space making in real time. The dancers improvise in an environment filled with the messages of impending disaster and collapse that are resounding around us today. They work to respond to changes in the system as they emerge in the VR landscape and despite the seeming impossibility, work to align with each other and the changing environment.