Sentience is a short film made as partial fulfillment of MFA thesis in Digital Animation and Interactive Media at the Department of Design, The Ohio State University. Completed in 2017

As humans, we have lived with the natural form the earliest times. We have seen and experienced nature and natural phenomenon in many different ways. In cinema, however, the use of natural phenomenon in its natural form is limited in the context of characters. This paper attempts to address the issue of how to use natural phenomenon and their inherent properties to create understandable and distinct characters. The design method introduced in this research includes a development structure that can be generalized for any natural phenomenon character. This paper also contains the documentation of production, results, and analysis of the short film ‘SentiencE’ which was made as a proof of concept for the approach proposed in this research.

A wondering sentient being found another similar yet different presence. During their time together they find themselves in a situation that will affect them profoundly. 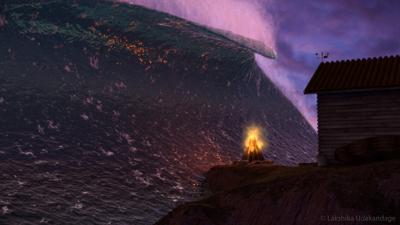 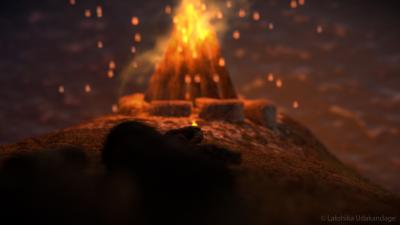 Mantra renderer was used for rendering with HDRI maps and GI lighting. Volume lights were used to get the firelight and heat glow. Components were rendered in separate layers and composited in Nuke. Corrective and stylization color correction was done in Nuke. Finished shots were imported to Premiere for editing.

Music recording, sound editing, and mixing were done using Digital Performer. Cello, Flute, and finger piano were used as primary musical instruments. Surround sound setup with a subwoofer was used to create the sound space for the film. 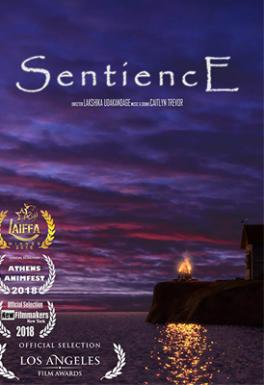 Lakshika Udakandage received his Bachelor of Science in Computational Physics from the University of Colombo, Sri Lanka. He spent a few years working at SKY Entertainers, Sri Lanka as a 3D generalist. He then moved to the USA and started his graduate studies at The Ohio State University. In the spring of 2017, he graduated with a Master of Fine Arts degree in Digital Animation and Interactive Media from the Department of Design, OSU. During his time at the OSU, he worked as the Motion Capture Graduate Research Associate at The Advanced Computing Center for the Arts and Design (ACCAD).

His area of interest is in VFX and simulations for cinema. The MFA research work focused on developing characters using natural elements and their inherent properties with minimal use of anthropomorphism. The short film 'Sentience' was devolved as a part of this research work. This research will lead towards a new reading and understanding of natural elements and how they can be used in cinema and storytelling.