In Theatre, performers interact with an audience in an environment that changes with respect to lighting, movement, set costume, and sound. Reproducing these essential elements in the classroom was only possible in small and focused courses--such as those dedicated to acting, directing, voice, and movement. Larger courses, such as Introduction to Theatre (Theatre 100) had to rely on the lecture format plus slides and video in presenting the material. This outdated mode of teaching failed to take advantage of students' growing computer/internet literacy and fell short of the multi-dimensionality of the art itself.

A virtual theater interface was designed. The interface was constructed around a virtual stage - a simulated 3D space that allowed the user not only to enter and explore the environment but also to interact with its content by controlling lighting, movement, and design elements.  In effect, the interface enabled a range of different virtual performances to be mounted under the interactive control of the user. The project involved the construction of a detailed simulation of the Department's Roy Bowen Theater, a 250-seat thrust stage located in the OSU Drake Union. 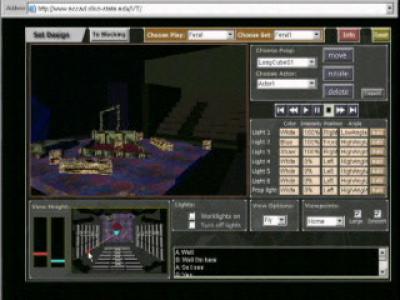 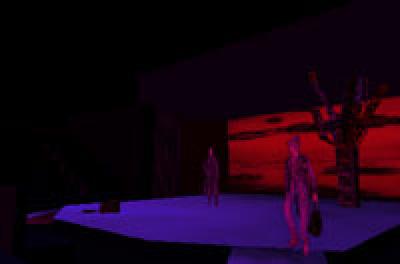 The simulation enabled users to:

The system offered two distinct benefits. As a new interactive tool, it offered undergraduates, graduate students, and faculty an exciting medium for experimental projects and research that situates the theatre department at a leading edge of theatre technology. As a pedagogical tool allowing students to take part in directing/design experiments that are impossible under existing arrangements, its introduction immediately benefited a large number of students on the Columbus campus as well as students on regional campuses at Newark, Mansfield, Lima, and Marion. Students at all these campuses enroll in the Introduction to Theater course which is one of the largest GEC courses in the university. [text modified by Matthew Lewis from the original grant proposal by Brian Rotman and Leslie Ferris] 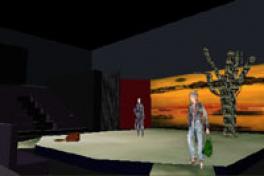 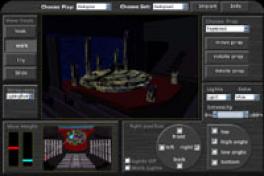 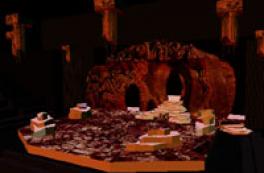